The History of Little Rock

A peek at the past of Arkansas' capital and most-populous city. 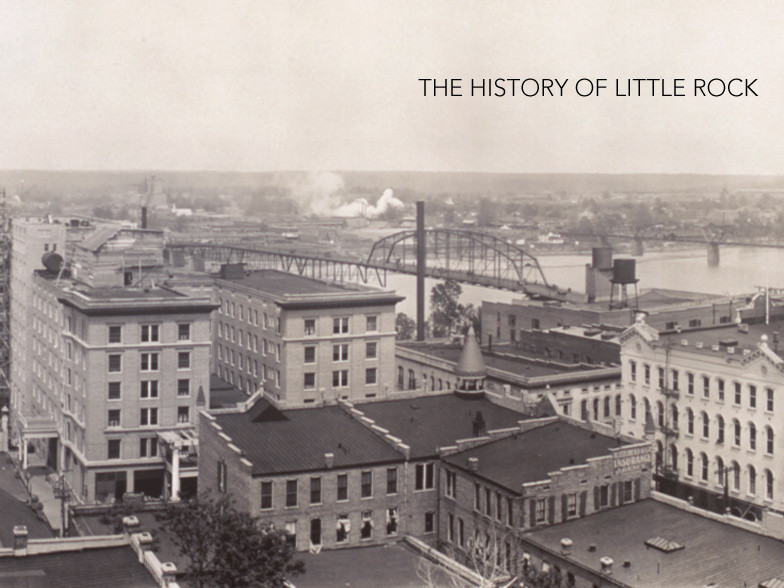 Downtown Little Rock in 1910. The Capital Hotel is visible on the right. Click here to see an expanded panorama of this picture.

Arkansas’ history dates back to 1541 when Hernando de Soto reached the state and found thousands of Native Americans living in villages near the Mississippi River, including the Parkin and Nodena tribes who settled across the state.

“The Rock” was included in the Louisiana Purchase of 1803, but a town wasn’t established until the spring of 1820 when a group of men permanently settled there. Land speculators, who had Meriwether Lewis’ pre-emption claims and New Madrid Certificates from the New Madrid Earthquakes of 1811–1812, soon arrived to stake claims of this land, naming the town “Arkopolis.” The name was eventually changed back to Little Rock and in the fall of 1821, the state’s territorial capital was moved there. It was incorporated as a town in 1831 and as a city in 1835.

Construction of the Old Statehouse was underway in 1833 at Markham and Center streets and was completed by 1842. Schools were built by 1853, followed by gas lighting in 1860 and the telegraph in 1861, just in time for the Civil War. 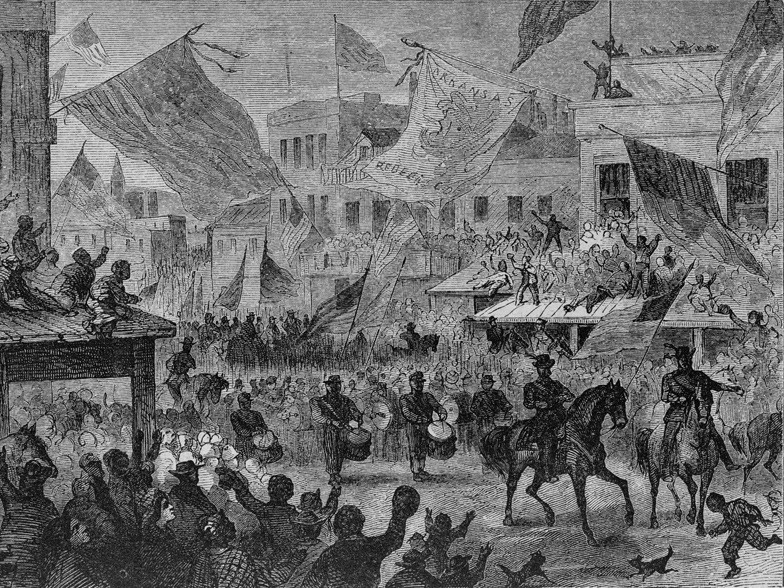 Library of Congress
Share It Tweet It Pin It
This print shows a jubilant crowd lining the street during the grand entrance of Union troops following the end of the Civil War.

During the war, all activity in Little Rock stopped. After the Confederate Army left Arkansas to fight in the war, the state was left undefended, giving Union troops a chance to travel close to Little Rock in Searcy—about 50 miles away. It was then when the state government was temporarily moved to Hot Springs.

By 1863, Union troops occupied Little Rock and set up a provisional government. The Confederate capital was then permanently moved to the town of Washington. By the end of the war, Little Rock, which had a population of 3,727 in 1860, had a cemetery with the remains of more than 2,000 Confederate and 2,000 Union soldiers.

After the war, Little Rock experienced a war of its own, the Brooks-Baxter War, when Republican Joseph Brooks seized the Old State House as governor after the government declared him the winner over Elisha Baxter. Both sides called the troops. Baxter appealed to President Ulysses S. Grant and U.S. troops were moved from the Little Rock Arsenal to downtown on April 20, 1874. 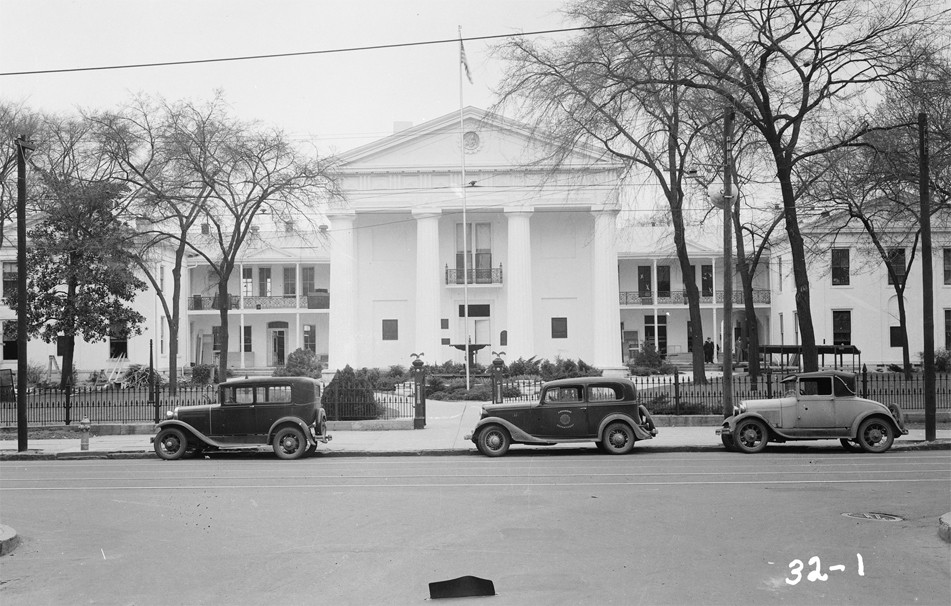 A special session of the legislature was called, which overturned the original election and confirmed Baxter as the governor. Brooks withdrew from the position.

The capital city started in the 1900s with the construction of the Arkansas State Capitol, which was finished in 1914. Some of the town’s major staples were established, like City Hall—completed in 1908—as well as the Little Rock Airport, named Adams Field at the time, and the Little Rock Zoo years later. During the year of the Flood of 1927, Little Rock Senior High School, now Little Rock Central High School, opened just in time for the fall semester. 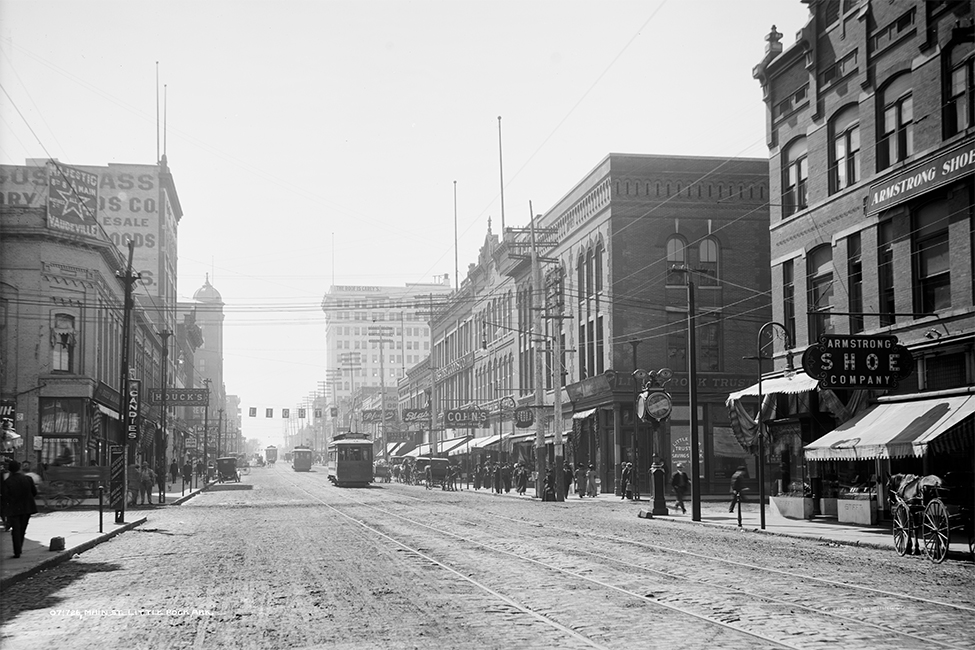 Now home to arts staples like Ballet Arkansas and the The Rep, Main Street today (below) looks much different than it did in the above photo taken in the early 1900s. 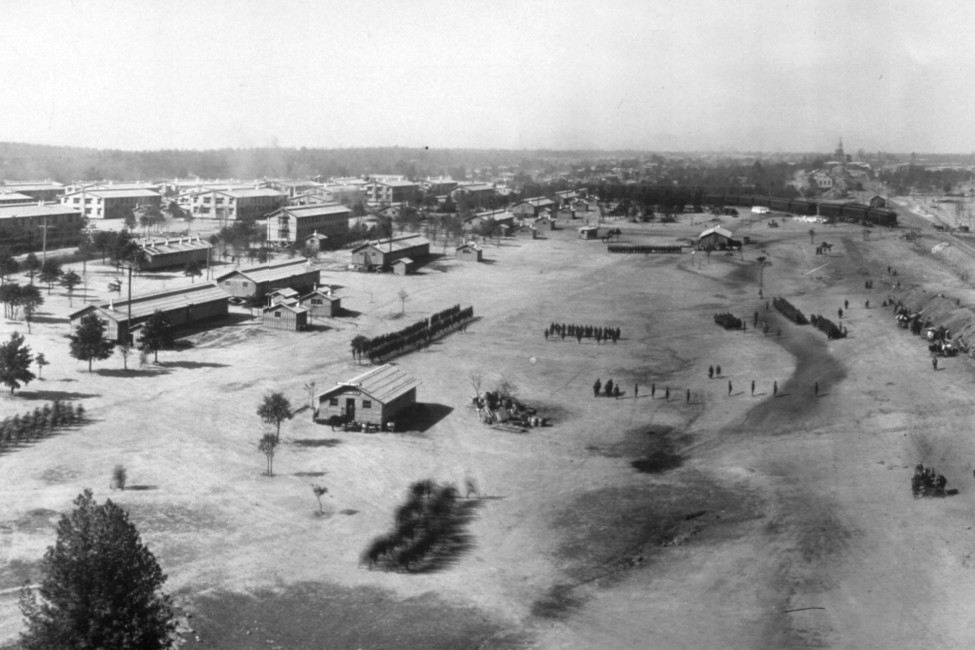 Because of war in Europe, Camp Robinson, located by North Little Rock and called Camp Pike during World War I, was reactivated in 1940 as a cantonment for more than 50,000 soldiers. This resulted in a severe housing shortage in Little Rock, which was rectified by the building of the Cammack Village suburb from 1941 to 1943. 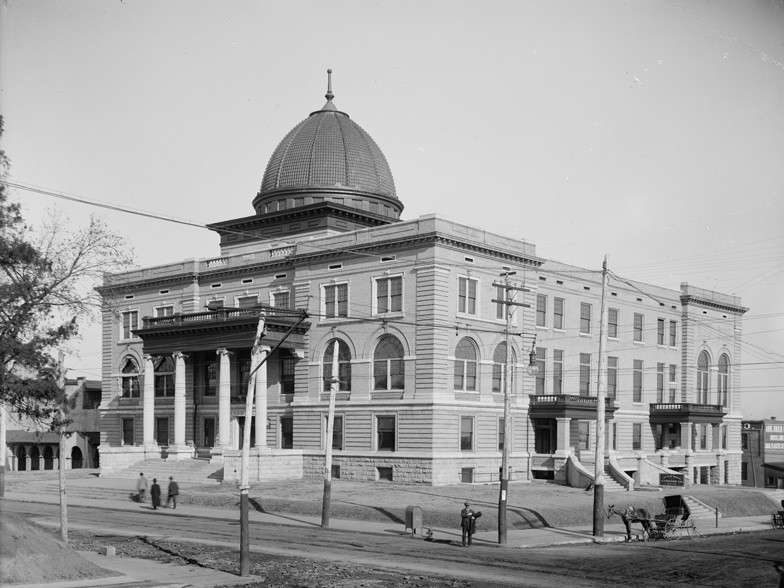 Education took center stage years later in 1957 when the University of Arkansas at Little Rock was created and the Little Rock School District approved an integration plan at Little Rock Central High School in the fall. There was local opposition, including Gov. Orval Faubus who called Arkansas National Guard units to prevent integration of the school. The federal government ordered the 101st Airborne Division to Little Rock, and under the guard of federal troops, integration at Central proceeded with nine African-American students, who later became known as the “Little Rock Nine.” 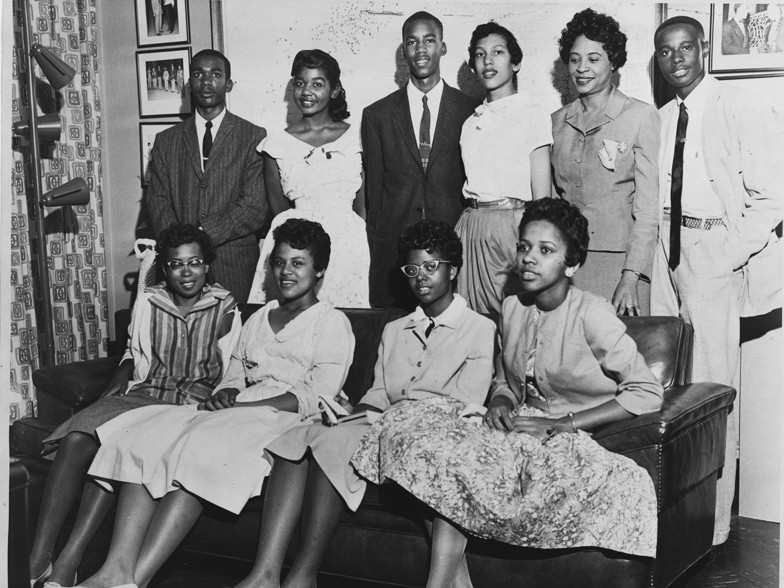 The Little Rock Nine and Daisy Bates (top row, second from right). Bates and her husband, L.C., were key activists in the Civil Rights Movement, and helped end segregation in the state.

In 1962, an urban renewal program in Little Rock closed many of the stores on Main Street and in 1964, the Quapaw Quarter Historic District was formed to save old homes on the east side of town.

The framework for the transportation system was laid in the '60s with an industrial park and railroad, as well as construction of Interstate 630 in 1977 and the present terminal at the Little Rock National Airport in 1972. 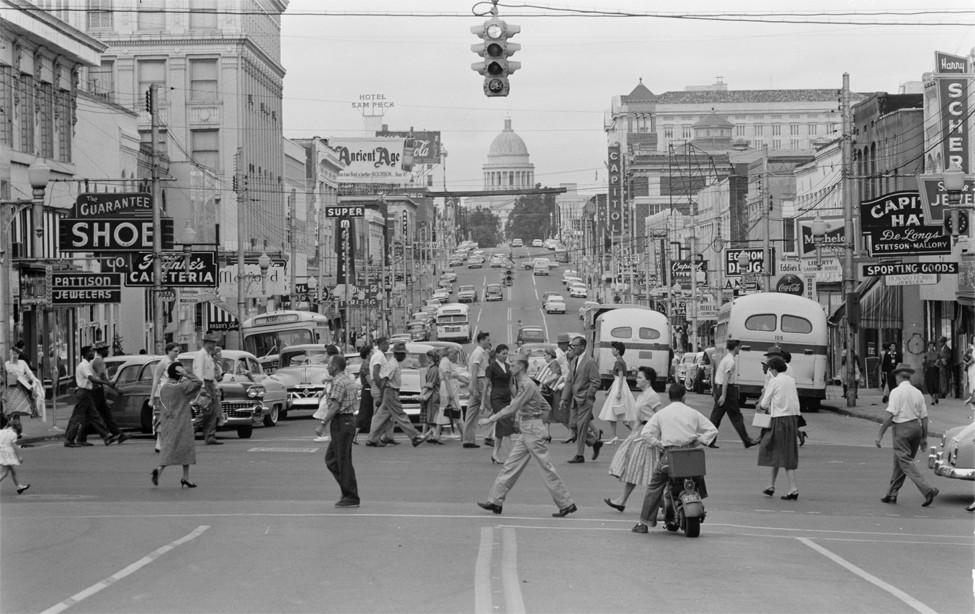 Downtown’s Capitol Avenue was a bustling epicenter of Little Rock life in the 1950s.

The William J. Clinton Presidential Center & Library—named for Bill Clinton, the 42nd president of the United States who was also the governor of Arkansas—opened in 2004.

The Big Dam Bridge opened in 2006, crossing the Arkansas River atop the Murray Lock and Dam west of Little Rock.

There have been strong efforts for revitalization across town. With a diverse lineup of restaurants, shops and museums and an influx of farmers markets and new businesses, neighborhoods on both sides of the Arkansas River continue to grow and offer locals an optimal place to live. 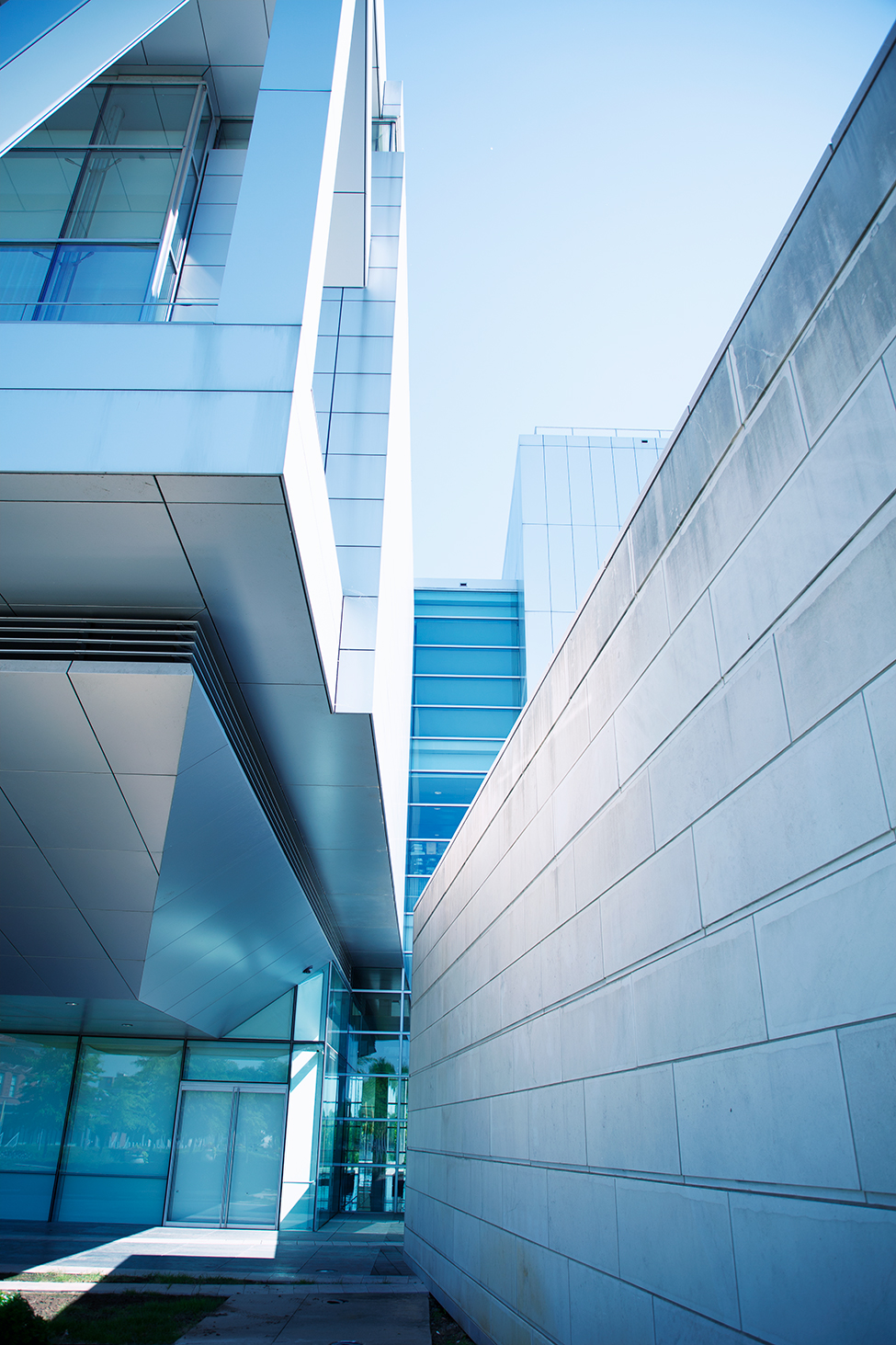 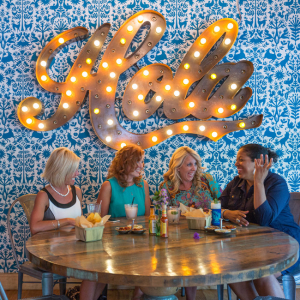 See and Be Seen at The Heights’ Upscal... 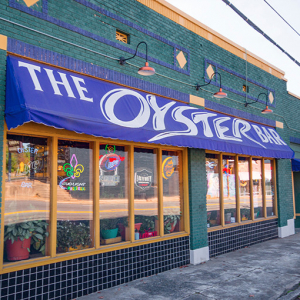 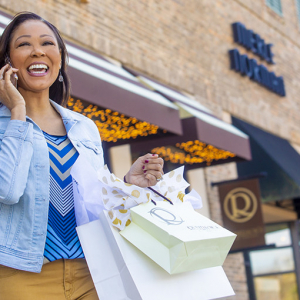 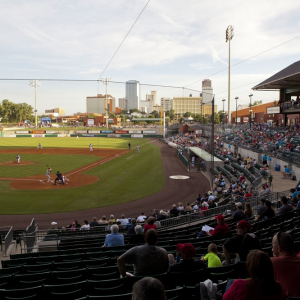 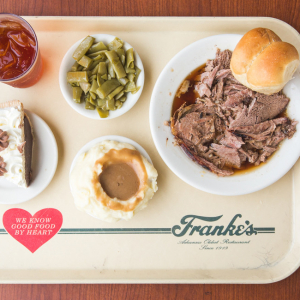 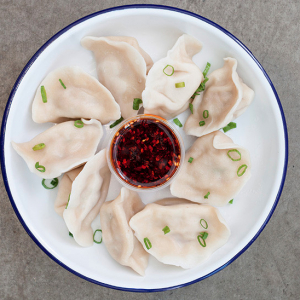 Feel a Part of Little Rock With These Et...
Permalink
Digital Edition